January 2021: The Year That Changed Everything

THE YEAR THAT CHANGED EVERYTHING

Born in London at the very end of the Second World War, actress Helen Mirren, known for her subtle and sympathetic portrayal of Elizabeth II in the movie ‘The Queen’ (2006), didn’t have to live through the nightly ravages of the Blitz – an intense eight-month bombing campaign conducted by Nazi Germany against the United Kingdom, which killed more than 43,000 civilians and left 1.5 million Londoners homeless. The offensive came to be called the Blitz after the German word blitzkrieg (lightning war) and was meant to cripple Britain’s war production and demoralize the population into surrender. Over a period of 267 days, London suffered 71 aerial attacks, including a staggering 57 consecutive nights of raids.

Mirren’s parents, on the other hand, spent the majority of the war in London and had to endure that night upon night upon night of intractable bombing by the Germans. Asked what is was like in London during the bombing raids, her mother replied: “We carried on, not as if it wasn’t happening, but because it was happening.” Did you catch that? They weren’t living in denial. They did not hide behind a wall of happy talk or try to minimize the danger. No, they carried on because they had to, because they had no other choice. Those ordinary citizens endured in the face of an external danger and discovered that they had the psychological and physical resources to cope with it. Austrian psychiatrist and Holocaust survivor Viktor Frankl put it this way: “Those who have a ‘why’ to live for can bear almost any ‘how’.” 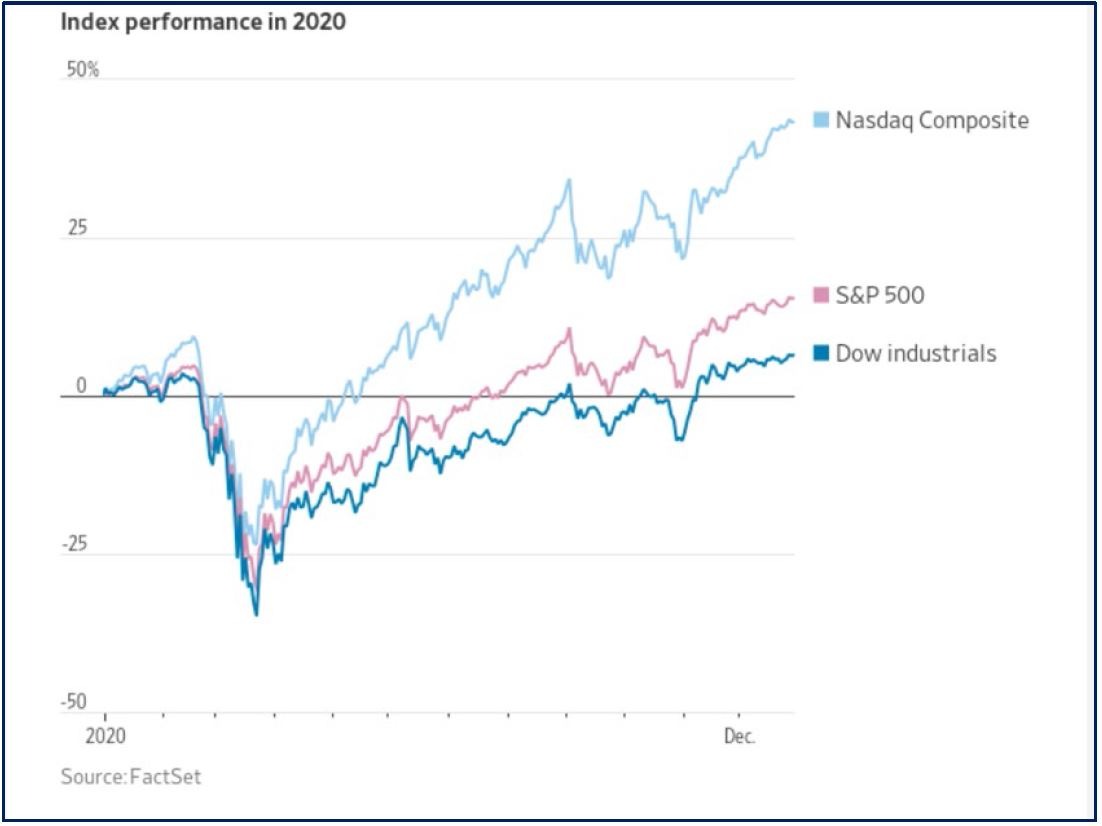 Economists often draw parallels to wars and natural disasters to model the outcomes of pandemics. Wartime analogies can be useful for an understanding of the social and economic consequences of this pandemic and may illuminate the path toward the ‘new normal’ that will emerge in the post-viral era. Major crises – whether wars or pandemics – are often powerfully transformative events, and it is important, especially for investors, to begin to think about the aftermath, as the economic fallout from this viral outbreak can last for years and have a wide-ranging impact on trade, wages and asset returns.

Nearly a year into the pandemic, the social and economic impact is enormous, and growing. Never before has the global economy been deliberately put into an induced coma. So far, Covid-19 has claimed nearly 2 million lives globally, and the associated lockdowns, social distancing, and other containment strategies have led to a range of psychosocial adversities, including economic hardship and financial losses (due to unemployment and reduced income), school closures, and increasing mental health problems. It’s no wonder that when asked for a single word that described 2020, the most frequent response in a USA Today/Suffolk University poll was ‘awful’, ‘terrible’, or ‘horrible’, adjectives chosen by nearly one in four. Nearly all of the people surveyed cited words that reflected strain or
pain. Last year reminded us that we have one life to live and that it is precious. We had a ‘why’ to live for, and it taught us ‘how’ to bear the ravages of the virus.

Indeed, 2020 was a year of once-in-a-lifetime extremes: the deadliest global pandemic in a century; the deepest quarterly decline in U.S. GDP history, followed by the steepest quarterly increase on record; a tightly contested U.S. election with a presumedly market-friendly outcome; the shortest bear market in history, followed by the fastest recovery on record; and the astonishingly rapid development and distribution of efficacious vaccines to inoculate billions of people, a process that typically takes a decade or longer.

Similarly, unprecedented was the fiscal and monetary response unleashed by governments and central banks around the world to contain the imminent financial stress and provide a bridge for households and companies affected by the coronavirus pandemic. The U.S. Federal Reserve swiftly cut benchmark interest rates to near-zero, deployed the full set of crisis-management policies at their disposal, and committed to quantitative easing (QE) for some time to come.

At the same time, lawmakers enacted four separate relief measures in March and April, which appropriated $2.6 trillion of fiscal expenditure, and just last week, Congress approved a massive $900 billion Covid-19 relief bill. Collectively these actions prevented the crisis from morphing into an even more extreme economic catastrophe. While some level of federal response was warranted, the massive surge in government spending, combined with declining revenues resulted in a record $3.1 trillion budget deficit for 2020 and further added to our country’s $27.5 trillion national debt. 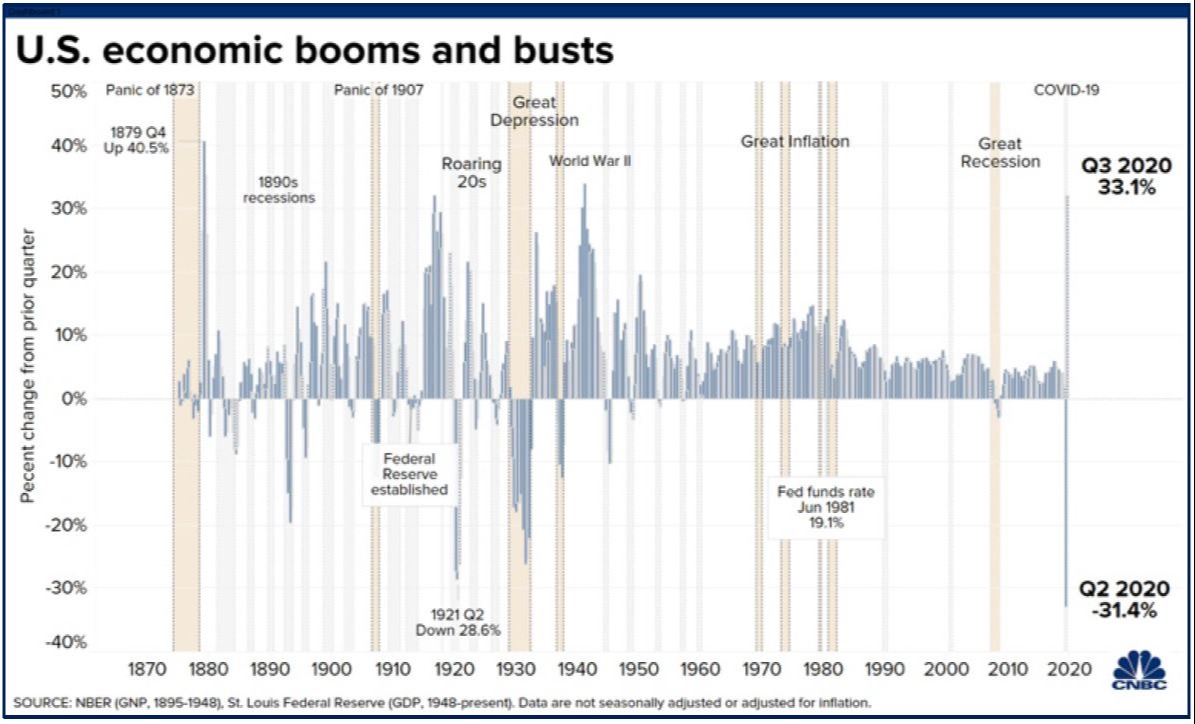 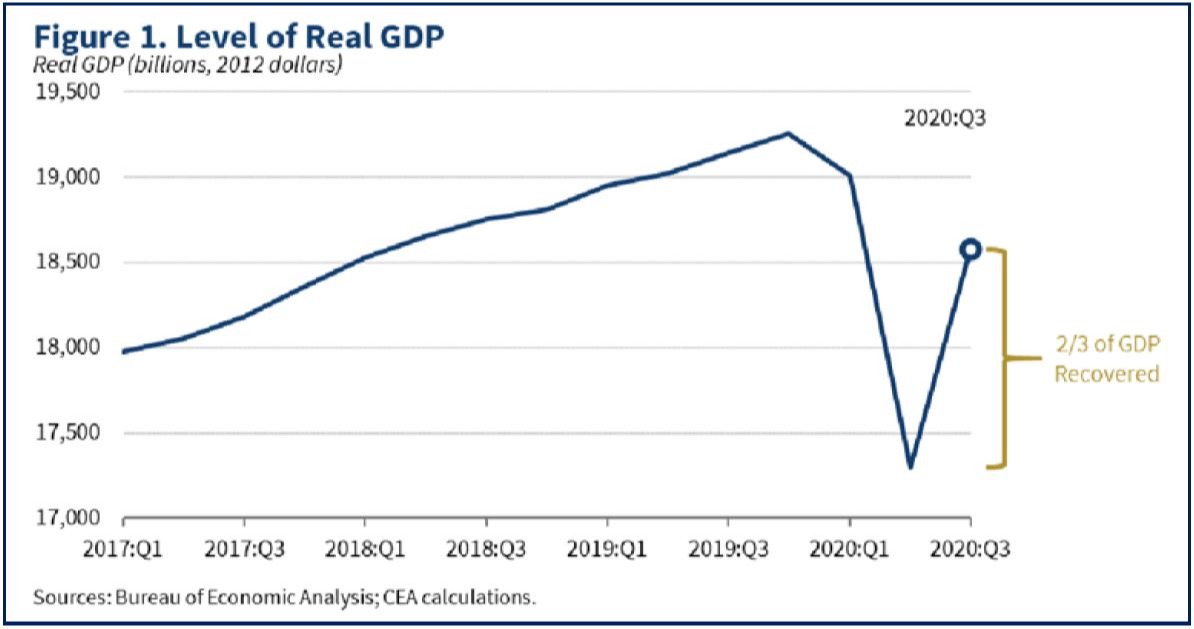 These unprecedented fiscal and monetary measures, along with a relaxation of the tight lockdown restrictions, allowed the economy to recover in May after it collapsed in mid-March on the heels of a nationwide shutdown. After shrinking at an annual rate of 5% in the January-March quarter (Q1), the U.S. economy suffered its worst period ever in the second quarter, with GDP plunging at a historic 31.4% annual rate. The economy recovered significantly in the July-September quarter (Q3), expanding at a record 33.1% annual pace (see top chart above). Despite this record-setting growth in the third quarter, the U.S. has only recovered about two-thirds of the output lost during the first half of the year (see bottom chart above). Real economic growth likely decelerated to just 2.8% in the fourth quarter as a resurgence in coronavirus cases slowed growth sharply during the year’s final months. Even after the third quarter’s rapid growth, GDP is expected to have contracted by 3.6% for the whole year 2020, which is not too different from the maximum decline during the 2007-09 recession.

Yet despite the Federal Reserve’s best efforts to keep credit cheap and easily available, a substantial number of businesses – especially small businesses – have already failed or will not survive. In addition, unemployment remains elevated. At 6.7%, the November unemployment rate was close to double the 3.5% rate in February, the month the pandemic hit the economy, and the nation still has roughly 10 million fewer jobs than it did before the viral outbreak.

The 2020 recession remains very unusual in at least one other way: During most recessions, spending on durable goods (such as appliances, home and office furnishings, consumer electronics, motor vehicles, etc.) tends to weaken, while consumer service expenditures (such as travel, food, accommodations, recreation services, etc.), which account for roughly 70% of total personal consumption and nearly half of U.S. GDP, typically act as a source of economic stability. For example, at its nadir in the second quarter of 2009, services spending was down just 0.6% year-over-year. In contrast, the economy’s extraordinarily rapid decline earlier last year was driven to a large extent by depressed activity in the service sector as consumers had to practice social distancing, schools and restaurants were closing, and large events were cancelled. Meanwhile, the housing sector outperformed the broader economy amidst historically low mortgage rates and a rise in remote work.

It was also a year of extremes in the stock market Even as the pandemic ravaged the Main Street economy and humanity in general, Wall Street flourished. After experiencing its steepest and quickest bear market decline ever in March, during which the S&P 500 lost 34% in only 33 calendar days, stocks quickly roared back from a low reached on March 23rd to hit new all-time highs less than five months later.

The rebound was mostly led by large-cap growth stocks that have shown resilient or even improving business fundamentals and delivered solid earnings reports. Among those were the largest five members by market capitalization of the S&P 500 (Apple, Microsoft, Amazon, Alphabet/Google and Facebook), which massively outperformed the remaining 495 stocks in the index. Those five mega-cap companies now account for 25% of the index’s total market capitalization, the highest level of concentration since at least 1980. Because the S&P 500 is weighted by a company’s market value, their hefty outperformance lifted the overall index. 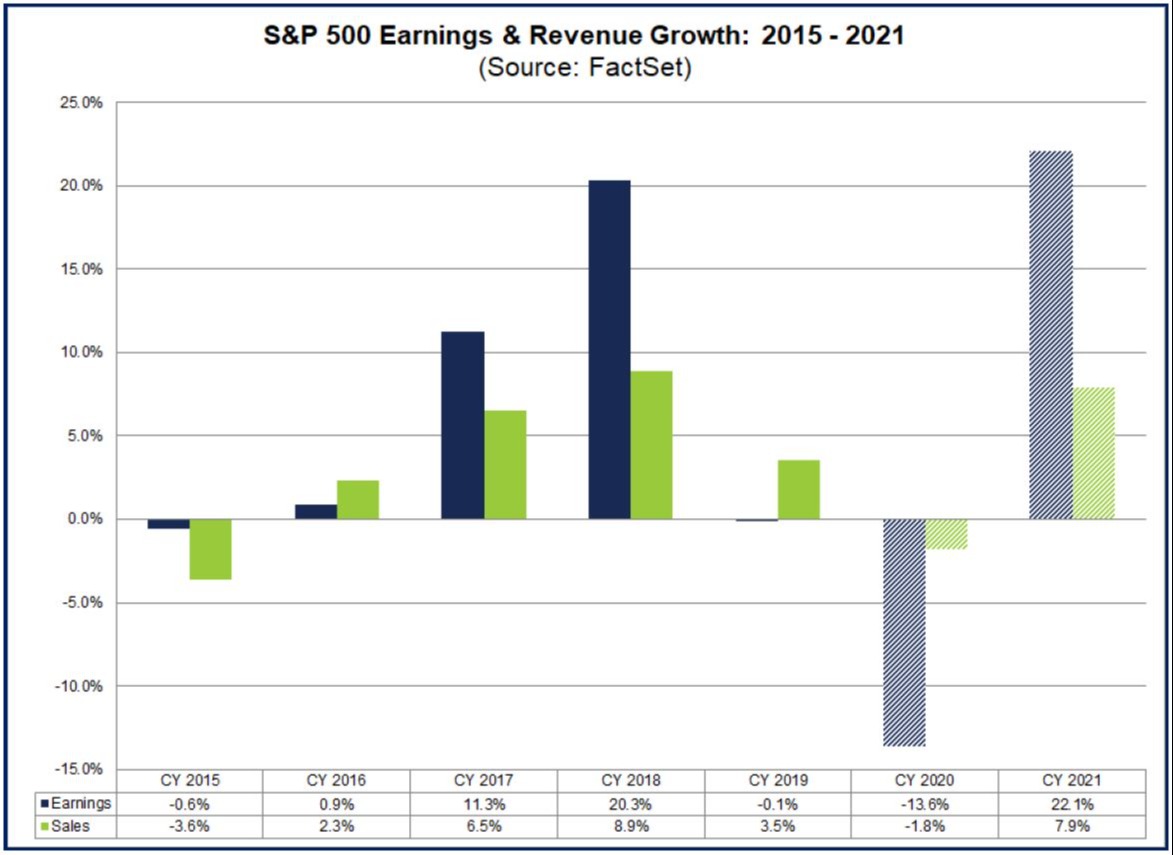 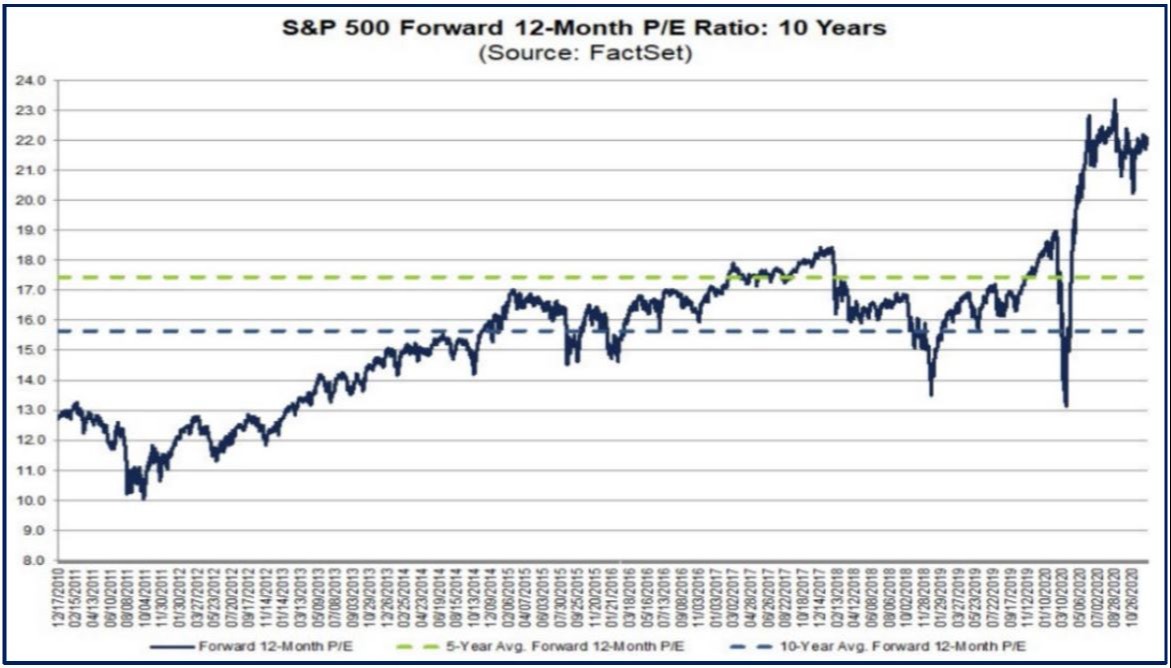 The tumultuous year that brought so many surprises was actually a surprisingly good one for investors. Massive monetary and fiscal stimulus, combined with the rollout of Covid-19 vaccines buoyed investor sentiment and allowed the major indices to finish the year with sizeable gains. The benchmark S&P 500 index finished the year up 16.26% at its own new high.

The Dow Jones Industrial advanced 7.26% for the year, while the Russell 2000 index of smaller-cap stocks gained 18.36%. Gold closed out 2020 at $1,893, up 25%. It was the metal’s best yearly percentage gain since 2010. Backed by the Fed’s monthly bond-purchase program of at least $120 billion, the benchmark Bloomberg Barclays U.S. Aggregate Bond Index rose 7.5% as bond yields generally declined. Perhaps it’s fitting that in a wild year, the best-performing asset by far was Bitcoin, which nearly tripled to just under $30,000. To paraphrase Charles Dickens, it was the best of times on Wall Street and the worst of times on Main Street.

The stock market’s rebound in the face of a languishing economy is not altogether unusual. Past bull markets, including the prior one that hit its nadir on March 9, 2009
began while the U.S. economy was still in a recession. Still, the speed at which stock prices appreciated last year propelled them to ever stretched valuations. According to data from FactSet, S&P 500 companies are expected to report a decline in earnings of -13.6% for all of 2020, before rebounding 22.1% this year (see top chart on previous page). That leaves the index trading at a forward P/E of 22.1x, which is above both, its 5-year average of 17.4x, and 10-year average of 15.7x, and therefore vulnerable to disappointment on a number of fronts (see bottom chart on previous page).

To dismiss the U.S. stock market as universally expensive would be a mistake, however. After all, price tends to lead earnings, and this year has been no exception. With interest rates at all-time lows and expected to stay this way, future cash flows become more valuable, which means that it makes sense for high growth companies such as some of the technology names to trade at higher valuations. Moreover, the stock market is a forward-looking discounting mechanism and is currently signaling optimism about the U.S. economy in 2021. The sanguine sentiment of a return to normalcy later this year seems to be a notable possibility amidst recent vaccine success.

While the effects of the pandemic still loom large and a resurgence in confirmed viral cases could slow down the economic recovery, we believe that the economy could quickly return to pre-crisis levels once public health concerns are addressed. Among the primary reasons to remain optimistic for the year ahead are:

On the other hand, the biggest risks to the market currently are:

The past year should serve as another reminder that investors should expect the unexpected from the market. It should also call into question the utility of stock market forecasting, as those forecasts, no matter how sophisticated, won’t bring certainty to an unknowable future, nor should they have any impact on your long-term financial investment plan. If anything, 2020 should teach investors that well-established principles, like developing a suitable asset allocation, portfolio diversification, and investing in attractively-valued, high quality businesses will boost their chances for long-term success. We can’t control the world around us, but we can control how we respond to it.

In closing, we are pleased to announce the addition of Alicia Jarvela to our firm. She serves as Client Service and Operations Specialist and replaces Niki Schackne. Alicia has many years of progressive client service and administration experience in the medical and financial industry. She is a great addition to our team and is committed to maintaining the highest level of service to our clients.

As we bid adieu to a (insert your own adjective) 2020, we are excited to start fresh in a new year that will hopefully feel a lot less chaotic. We are grateful for the opportunity to continue working with you and thank you for your continued loyalty, trust and support! The entire Telos team wishes you a happy, healthy and prosperous New Year 2021!